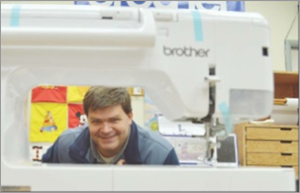 Business partners Alan Fairbanks and Ron Loynd started the 2015 New Year off in stitches by creating the All-Star Sewing and Embroidery store.

The men purchased the former Sperry Sewing Center at 475 Yellowstone in January of 2015.
“We saw an opportunity and took it,” Fairbanks said.  In December 2017, they were able to acquire Sages Creek Quit Company

Loynd learned to sew when he was just 6 years old. It’s a hobby/skill he honed throughout his life, thus enabling him to now turn it into a career at the shop.

Fairbanks doesn’t sew, but what he lacks in stitching, he makes up for in maintaining sewing machines. “Ron does the sewing portion, and I do the repair,” Fairbanks said. The company sells everything from beginner sewing machines to the most advanced machines in the industry. Some are sewing/embroidery combo machines, others are either sewing or embroidery only.


All-Star Sewing & Embroidery everything from beginner sewing machines to advanced ones. The men purchased the former Sperry Sewing Center at 475 Yellowstone earlier this month (Feb 2015). “We saw an opportunity and took it,” Fairbanks said.